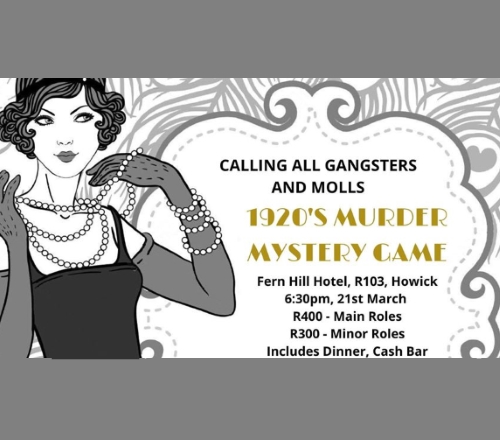 Play a role in a murder mystery game set in a 1920's Speakeasy. Gangsters, Molls, Politicians, Police and more are all attending a party at 'The Juice Joint' when a murder happens.

Your character will have their own backstory, secrets and goals to achieve in the game. Your goals might be to solve (or get away with) a murder, or you may have other goals that have nothing to do with the murder.

There is no 'acting' on stage in front of everyone. You mingle and chat to people in character one-on-one or in small groups to achieve your goals. You can extort, blackmail, swindle, steal, whatever you think your character would do in the situation.

There are two levels of roles in the game, we need 15 - 19 people to play the main roles, which are named characters who are integral to the main story arcs. These players will be a bit busier in the game, as the other characters will be coming to chat to them to achieve their own goals. Then there are minor roles, which aren't necessary to move the story along, but they still have their own secrets and goals and will be interacting with the main roles in order to achieve their goals.

Tickets are R400 for main roles and R300 for minor roles. The ticket price includes dinner, and we will be running a cash bar. The game will last for 2 - 4 hours, depending on the number of players and how involved in the game people get.