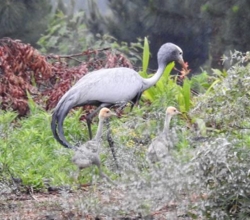 This pair of Blue Cranes and their two chicks were seen by Pam Curtis who reported this amazing sighting.

Blue cranes will normally lay a clutch of 2 - 4 eggs approximately 2 to 3 days apart. Incubation period is about 30 days with both male and female sharing the incubation. Newly hatched chicks are mobile within a day of hatching with the parents leading them into areas where they can forage . As is the case with most chicks, strong sibling rivalry has been noted resulting in parents keeping the chicks mobile and splitting them between parents. They fledge when they are about 3 months old. The pairs will leave their breeding territories when the young are about 5 months old and when they join the flocks for the winter months, the young stay with them. Only when the pairs return to their breeding territories in spring are the young then left with the non breeding flocks.

The success rate of Blue cranes successfully raising chicks in the Karkloof hasn't been very good, so we are hoping these two little chicks will survive to adulthood.

Did you know that the Blue crane is one of two species of cranes that don't have any red on their faces, the other being the Demoiselle crane which is found in Eurasia.

What great work being done by the Karkloof Conservancy.

News supplied by the Karkloof Conservancy.