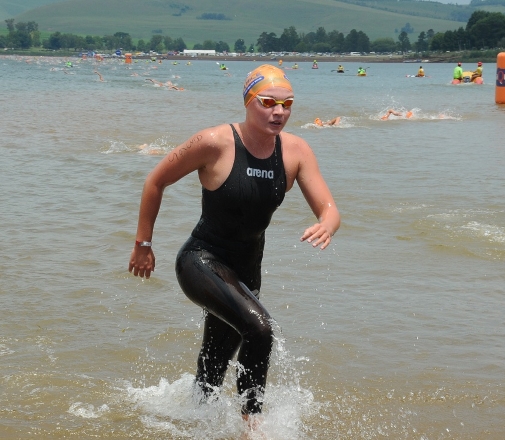 She’s one of the country’s top open water swimming prospects, targeting her second Olympic Games, but for Michelle Weber, the aQuellé Midmar Mile is all about the festive vibe.

The 2016 champion has been competing in the event from the age of 11, racking up a remarkable record along the way. While she’s all focus and resolve when she’s in the water, it’s what takes place before and after the racing that brings her back each year.

She’ll be returning for the 2020 edition of the world’s largest open water swimming event from 8-9 February, where she’ll be gunning for more glory.

“I love the Midmar Mile. I was raised in Umhlanga, so we went up every year for it. I think it’s just so special to me because my family started out just going to open water events for fun. We used to camp on the weekend and take a boat out, and our canoes and stuff, and just enjoy the weekend and then have a swim and braai. So I think that’s what makes it so special for me, and it holds a very dear place in my heart,” she explained.

Weber’s chief target for the year is competing in the 10km open water swim at her second Olympic Games in Tokyo this August, so the aQuellé Midmar Mile is not quite as gruelling a challenge, but it will still provide a crucial opportunity for Weber to test herself against some tough competition.

“My training has been going well. It’s an Olympic year, so it’s obviously a really big year for me as well as a lot of other athletes. I think the competition is going to be quite tough on both the men’s and women’s side. Everyone is going to be swimming really fast,” said the 23-year-old, who’s now based in Franschhoek in the Western Cape.

“I love doing the Midmar and I think it’s cool for Olympics. Firstly because I get to see all my friends and just to get a break, but also it fits into my training schedule for the Games – just to see how fast I’m getting and how I’m feeling in the water. It’s great because it’s a month before Nationals, so any concerns or anything I feel isn’t right in my training, I can fix very quickly.”

A top-two spot at the National Championships will be the first step to qualifying for Tokyo, where only a limited number get the opportunity to compete.

“It’s pretty tight, and it’s hard, because in open water swimming, we only have 25 swimmers in the event compared to pool swimmers, where there are a lot more. It’s hard because conditions change, race tactics change – you need a lot of experience for this, and I’ve been doing this for a while, so I’m pretty excited to see how I’m going to do.”

Much of that experience has come at the famous KwaZulu-Natal dam, where Weber has notched up an incredible record over the years. She’s finished in the top eight on each of the 12 occasions she’s competed, winning the 13 years and under category in 2009 and 2010, and the senior title in 2016, while finishing second last year behind Australia’s Kareena Lee.

“It’s always amazing having the internationals coming through. It’s cool to race against them and also see how they do and chat to them while they’re here. I think that’s the nice thing about open water – a lot of people do take it seriously, but it’s also a lot more social than pool swimming. So just the vibe they bring is pretty amazing.”

“For this year, I’m not sure who will be the biggest competition. You never know what’s going to happen on the day. Open water is strange like that. Conditions change, you can get a wrong line, and it could just not be your day.”

“I just love open water swimming, though, because I get to travel to so many different countries and I don’t just swim in a pool, I get to swim in some of the most beautiful oceans, lakes, dams and rivers, so I think that’s what makes it so incredible. I love the adventure that comes with it.”

For more information on the aQuellé Midmar Mile, head to www.midmarmile.co.za