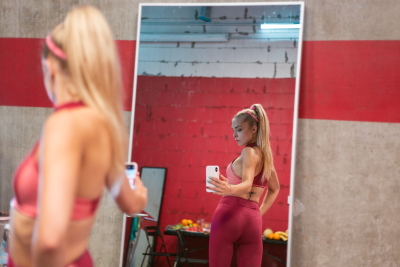 The film Sweat, currently available free as part of the online 2020 European Film Festival in South Africa, is about four days in the life of a fitness motivator whose presence on social media has made her a celebrity. The film is described by Cineuropa as ‘a rivetingly sober, incisive investigation of loneliness and intimacy in the Instagram era, a psychological profile of an influencer.’ Using Sweat as an entry point, the festival’s Special Event programme presents a Live Zoom discussion entitled Social Media and Me - Who is Winning? featuring the director of the film, Magnus von Horn, in conversation with clinical psychologist Dr. Khosi Jiyane, well-known for her contributions as the resident psychologist on Radio 702, 3Talk with Noeleen on SABC, and in other media.

In this day and age when social media has occupied such a dominant part of our modernised lives, and with COVID lockdowns doubling the amount of time people spend on social media, this is a timeous exploration of how we manage our use of social media. How real are the social media personas we present to the world? Does social media distort our sense of who we are, and alienate us from a meaningful relationship with the world and, crucially, with ourselves? Where is it all headed?

For more about Sweat and the festival films visit www.eurofilmfest.co.za. Join the Live Zoom discussion at 18.00 on Monday 16 November, log in on the Special Events page for access.

The European Film Festival 2020 is a partnership project of the Delegation of the European Union to South Africa and 12 other European embassies and cultural agencies in South Africa: the Embassies of Austria, Belgium, Ireland, Lithuania, the Netherlands, Poland, Spain, Sweden and Wallonie-Bruxelles International, the French Institute in South Africa, the Goethe-Institut, the Italian Cultural Institute, and the British Council. The festival is organised in cooperation with CineEuropa and coordinated by Creative WorkZone.