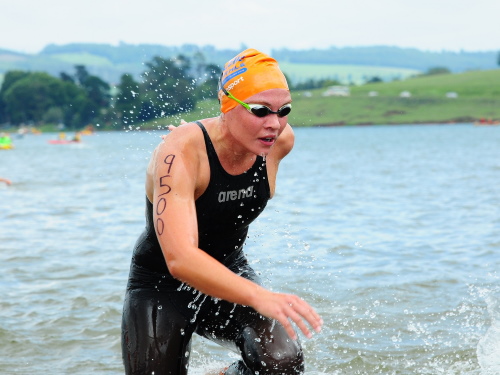 While 2020 was a tough year all round, Michelle Weber had to endure more than most. The former aQuellé Midmar Mile winner lost her mom early in the year and then had her sport taken away from her when the nation went into lockdown and she was unable to swim or compete at the Olympic Games she had been targeting when the event was postponed.

But Weber has managed to rise above the challenges and is relishing the prospect of finding out what the next few months hold, starting with the aQuellé Midmar Mile this Sunday, 7 March.

Weber will be one of an elite field of 20 swimmers to tackle the women’s race, and she’s excited to see how it all pans out.

“Last year my mom passed away so it’s been a very difficult year trying to get through that, and trying to get through the Games not happening and still trying to find the motivation to train,” she admitted. “I’m definitely in a lot better headspace now. The thing that I just decided is that I love the sport and no matter what happens, I’ll still compete and just have fun anyway.”

As for all swimmers around the country – and the world – training has been a tricky task.

“Under lockdown, a lot of the time I couldn’t train. As soon as the pools were open for national squad members I started swimming but honestly not much. I tried to sneak into the ocean and some dams a couple of times but the water was freezing here in the Cape so that didn’t last too long either.

“It’s definitely been a strange year but I’ve made the most of what I could do and the Olympics is going ahead now, we’ve got nationals booked for next month and I’m so happy that Midmar is going ahead. So with the prep that I could do, I’m feeling pretty happy.”

Weber first competed at the aQuellé Midmar Mile at the age of 11. She’s finished in the top eight on each of the 13 occasions she’s competed, winning the 13 years and under category in 2009 and 2010, and the senior title in 2016, while finishing fourth in last year’s race.

This time, without the usual crowds around the elite swimmers, the 24-year-old is expecting a different sort of race.

“It’s going to be a strange year, not having all the participants there but I’m so happy that our event is going on as scheduled – it’s just a sign that no matter what happens, open water will still exist and I think it’s amazing that Wayne [Riddin] has put everything together so a massive thank you to him and everyone that’s involved.

“I think you can expect a much closer race whereas in the past there was a huge gap between the swimmers. I think you’ll find that a lot of us might even finish together, so it’s going to be interesting and definitely something to watch.

“I’d like to swim fast and see how I race against my competitors before nationals – it’ll be a good way to show where I’m at right now.”

Find out exactly where she’s at in terms of training and racing will be vital as Weber targets a second Olympics, having competed in the 10km Open Water event in Rio in 2016.

“I’m definitely trying to get to the Olympics this year. It seems to be going ahead so I’ve been training really hard and I’m in a pretty good place and in good shape so I hope that I do make it – fingers crossed. I did it four years ago so I’m going to try again, put my head down and train really hard.

“Midmar fits into that well – just in terms of getting a race in and getting in the open water and racing some fast swimmers. It’s such an iconic swim as well – I’m excited to see what’s going to happen.”