Gail Bristow back for 48th year despite Midmar challenges 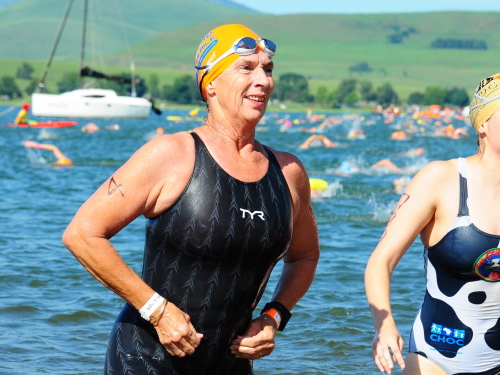 The virtual aQuellé Midmar Mile came to an end over the weekend and while there have been numerous challenges, organisers have hailed the success of the event.

Elite women’s and men’s races were held on 7 March, with Olympian Michelle Weber and defending champion Michael McGlynn emerging as the winners before the intrepid swimmers completing the 8 and 16 mile events took to the water on 11 and 12 March, raising over R1 million for various charities.

But for the rest of the country’s swimmers, the event was a virtual one with competitors able to complete their miles at various venues across the world.

One of them was Gail Bristow, who has been at every aQuellé Midmar Mile since 1974. Determined to complete her mile as planned, she wouldn’t be kept away from the famous KZN dam and headed to Midmar for her virtual swim.

“I was always going to make the trip so when the swim changed to a virtual mile I decided to travel up from Cape Town anyway. It wouldn't be quite the same swimming in a pool,” explained Bristow, who competed in the inaugural event 47 years ago but was not awarded a medal as women were initially not officially allowed to swim.

“There are a lot of factors involved in getting up to Midmar each year so I am very grateful that I was able to make the trip and everything went smoothly. This year more than most.”

Speaking about the challenges involved in preparing for the 2021 event, the retired teacher explained: “Training was very difficult as in Cape Town we have very few outdoor pools and the indoor pools were all closed until just a few weeks ago. So I only started doing some distance swimming very recently.”

Bristow has swum the world’s largest open water swimming event is many different conditions over the years, but none could quite compare with this year’s version.

“It was a very different experience without spectators and the huge numbers. The organisers did an incredible job of keeping everything Covid compliant and safe for anyone who took part. I did miss seeing everyone at the start line but hopefully that can return next year,” she said.

“I had a really relaxed swim even though mostly on my own. Usually there are swimmers around me to follow or swim alongside. This year it was a solo swim. Conditions were a bit choppy for part of the way but it was a comfortable swim.”

As for what brings her back every year, Bristow added: “Midmar Mile is the biggest open water event in the world so it is very special. I've been swimming it since I was 14 when it first started so it will always be a special swim on the calendar.

“[Race Director] Wayne Riddin and his team organise an incredible event and for all their hard work I thank them. I will be back next year with hopefully the full event back on track.”

Meanwhile, Riddin thanked all those who took part in the event in whatever form that took. “This year has thrown all sorts of challenges our way but we’re just happy that so many people could complete their miles and earn their medals as planned.

“Our thanks go to them and all our wonderful sponsors for their understanding and patience at this tough time and we look forward to returning the aQuellé Midmar Mile to all its glory with a full event planned for 2022 as we lead up to the 50th anniversary in 2023,” he said.