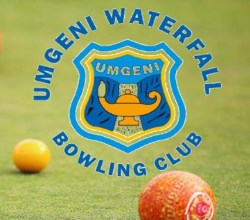 After being rained out for 4 months in a row, the Two-Bowl Trips competition sponsored by Woodstone Craft Café was happily held on the set date on a warm autumn day.

RESULTS
The above competition was won by a team from Howick Bowling Club: Larry Williams, Craig Whitby and Mark Taylor. The runners up were Colin Burden, Bob Chetty and Barry Fairbrother from Umgeni Waterfall BC. The winners of the Plate event were Richard Chard, David McLean and Barbara Hook also from Umgeni Waterfall BC Toucher prizes went to Rusty Ikin(HBC), Bob Chetty(UWBC) and Cindy Bro (Sponsor’s team). Well done to all the winners and thank you to our sponsors.