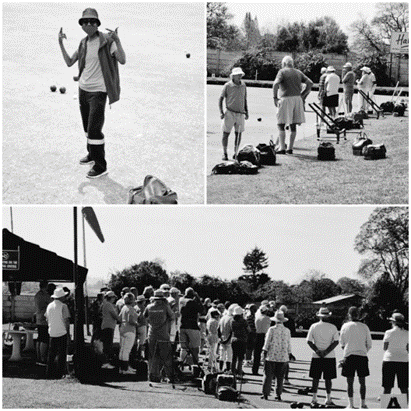 What a bumper week was had at the club.

The Heritage Day Competition sponsored by Woodstone Craft Café turned out to be a day of serious bowls and a lot of fun.

The winners of the competition Craig Whitby, Mark Taylor and Fanie Bester. Runners Up were Robbie Rajah, Vis Padayachee and Ian Bevis. The winners of the plate event were Kevin Palmer, Kirsten Hughes and Grace Abraham. Winners went home with generous vouchers for a meal at Woodstone Craft Café. We thank Craig Whitby of Craig Whitby Financial Services for the caps he provided as prizes. These were given as consolation prizes to the teams with the lowest scores.

The braai which followed prize-giving proved to be popular as was the Jumping Castle sponsored by Shayne Knott, which provided fun for the young ones (and some not so young) who were present.

FORTHCOMING EVENTS FOR OCTOBER - PLEASE DIARISE
Wednesday 13 October: Tabs In Competition sponsored by Halfway Toyota with vouchers for coffee and cake from The Treatery. Tabs In by 13h15

Friday, 22 October: Two Bowl Trips competition sponsored by Woodstone Craft Café. Existing Teams to pre-enter via the Woodstone Trips WhatsApp group. Any new teams wishing to enter may call or send a WhatsApp to to 071 164 3162

The Greendale Spar competition which normally takes place on the second Saturday of the month will be played on a date to be confirmed.

GENERAL
Coaching by qualified coaches is available by arrangement – phone or Whatsapp 071 164 3162. Prospective new members, experienced or novice are always welcome! Come along on any club day and speak to any one of our friendly members.